Taking a stroll through Pike Place Market. I actually underestimated it. I mean, it’s a market. I just didn’t think it would be all that interesting. However, it takes up a whole city block on one side of the street and most of the block on the other side of the street. We walked around for about an hour and a half and it still felt like we hadn’t seen it all. Lots of produce. Lots of flowers. Lots of seafood. All over the place.

Many of the vendors would shout out witty or quirky reasons why we should buy their products. One of the guys selling produce yelled “Fava beans here. Getchyer fava beans. Fava beans for Mother’s Day”.

Overnight in Seattle – May 10th

We arrived in Seattle on Saturday evening, May 10th, after driving for about 18 hours. We spent the night at the Sheraton in downtown Seattle. Karen got a really good deal through Priceline and the hotel was really nice. What a blessing! We didn’t do any sightseeing in Seattle until the next day, before we boarded the ship, but I did think this was worth sharing 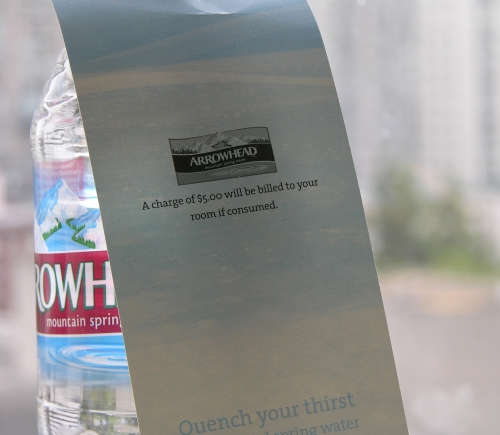 Quench your thirst with a $5.00 bottle of filtered tap water.

Not sure if you can see it. The expiration date, on that very expensive bag of “Tim’s” potato chips, was February 2008.

Driving to Seattle – May 9th

Karen and I love driving. We always look forward to spending time together on the open road. It’s a time when we can forget about everything that’s going on in our busy lives and just reconnect. Below are a couple of the photos I took while driving to our halfway point (Karen’s parent’s house in Savage, MT).

Dogs must be leashed. Bison, however, are a different story.

Karen and I recently went on a cruise to Alaska. She posted several items over at her xanga site. I just have a few thoughts I feel are worth sharing. These are things I’ve said over and over again to friends, so please forgive me if I’m repeating myself.

1. I enjoyed the time. It was very relaxing. I’m glad I did it, but it’s not something I’m going to do again.
2. From my perspective, the point of a cruise seems to be all about the cruising. It’s not about any of the ports you stop at or anything you might have the opportunity to do while you’re stopped in a port.
3. The food was very disappointing. There were two evenings where we had awesome meals. The first was one that we had to pay for on top of the cost of the cruise (most meals were included). The second was a salmon grill where they prepared fresh salmon fillets on open flame. They also had some kind of berry cobbler for dessert. Overall though, if you wanted to avoid the crowds during any meal time, you had to get there either really early and wait for the food to arrive, or you had to get there after the crowds were all gone and then the food was stale. It was basically a buffet served cafeteria style. The quality was on par with Old Country Buffet.
4. The ocean is really boring, especially when it’s cloudy and gray, which it was almost the whole time we were at sea.

In summary, if you’ve never been on a cruise but you’ve always wanted to go, don’t let me discourage you. Concerning this particular subject, I believe people fall into one of two camps. If you enjoy solitude and quiet and being in complete control of your vacation, a cruise is probably not for you. However, if you enjoy meeting new people, spending long periods of time on the open sea, and substandard food, a cruise is probably going to be right up your alley.

Look for some photos in future posts.