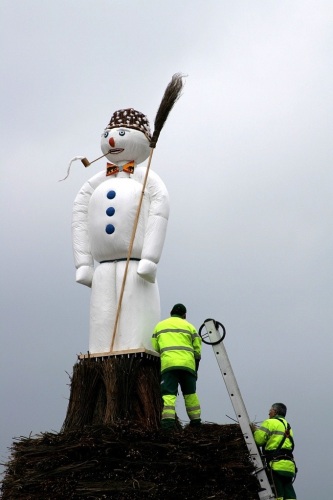 Sechseläuten is an annual spring festival in Zurich. The festivities start around mid-day, with vendors setting up booths with traditional sausages, cheeses, candies, and various other goodies.

Starting around 3:00, there’s a parade where people dress up in traditional garb from various times in Swiss history, or as their favorite historical figures. One man I saw was dressed as Albert Einstein, complete with the recognizable crazy hair he wore in the later part of his life. Another man dressed as the reformer John Calvin, who (I didn’t know this previously) preached over 2,000 sermons in Geneva.

Around 6:00 PM is when they light the Böögg. Legend dictates that a quick burning indicates the coming of a warm mild summer. A long burning means a cold and rainy one. This year’s burning was officially recorded at 12 minutes and 07 seconds, promising a medium warm summer.

Fire creeping up the tower

Not even recognizable as a Böögg anymore

Merely a shadow of what he once was

One response to “Burning of the Böögg”